After a little confusion and a lot of euros we managed to make our way from the Hook of Holland into Amsterdam. The train ticket machines take only Euro coins! They don’t currently take US credit cards which is really annoying and of course our tickets were 20 euros each to get to Amsterdam. Luckily, a local woman took our cash and bought us the tickets on her card. The best option is to buy an OV-Chipkaart for 7.50 Euros and refill it as you travel around the Netherlands because it gives you discounted rates on fares and is easy to refill.

We stayed in the Almere area which is some of the newest, quietest and cleanest suburbs in the area but it is a little far from Amsterdam proper than we would want for next time. Our host Marc from AirBNB was super sweet and even had Karamel Stroopwafels waiting for us in the room! These things are super delicious — especially with some tea in the morning!! 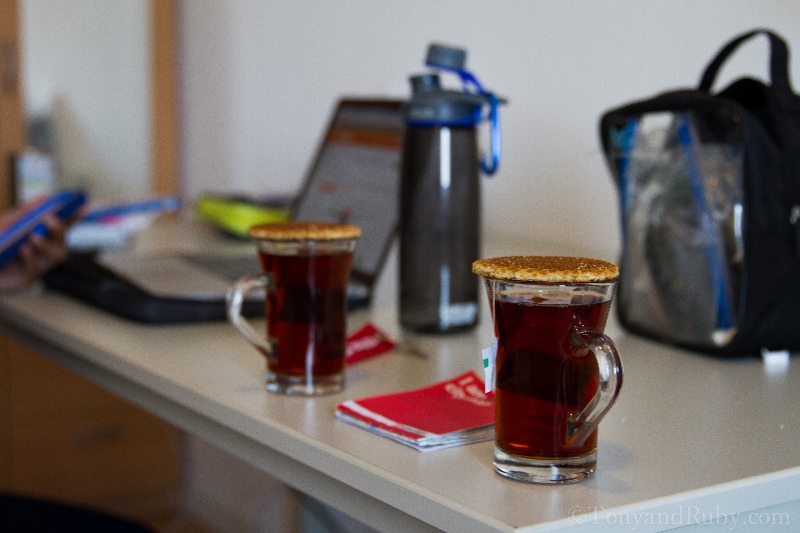 On the train ride into Amsterdam we had to laugh at some of the towns such as Muiderpoort which literally sounds like “Murder Port” when they announce it and we wonder. . who’d want to visit there?? Of course now whenever Ruby gets mad at me, she says “Do you want me to buy you a one-way ticket to Muiderpoort”?” LOL

You can also see the iconic windmills on the train ride into Amsterdam and since we weren’t going anywhere else in the Netherlands we thought we’d stop in Weesp and try and see them. . . but it was a failed mission and we ended up on an hour plus detour in some little town LOL because a local bus driver eagerly nodded his head when we asked if we could see the windmills on his route (clearly he didn’t understand English!)

The Amsterdam train station is huge and is super convenient to all the places you’d want to see. We started walking the town and started at Dam Square and watched throngs of people collecting there to feed the pigeons. 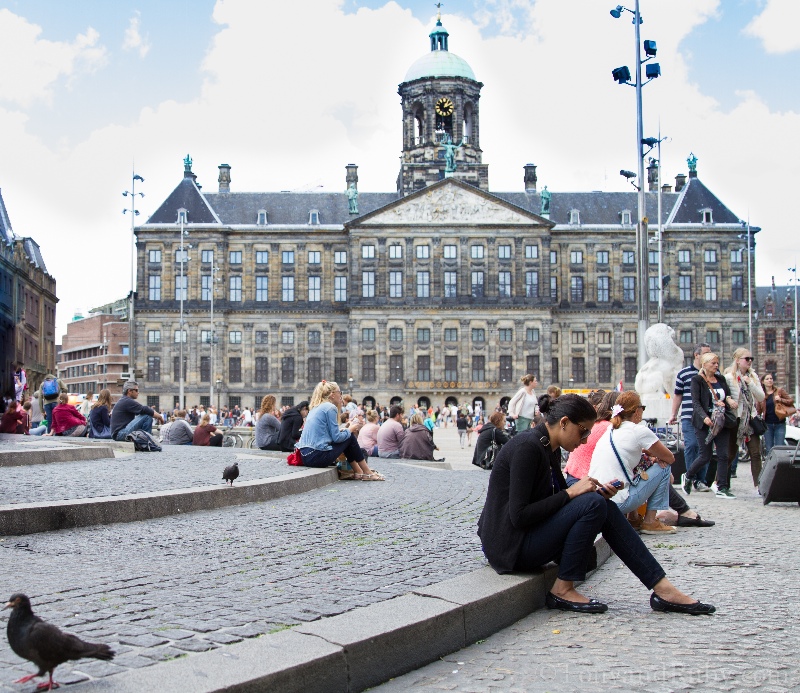 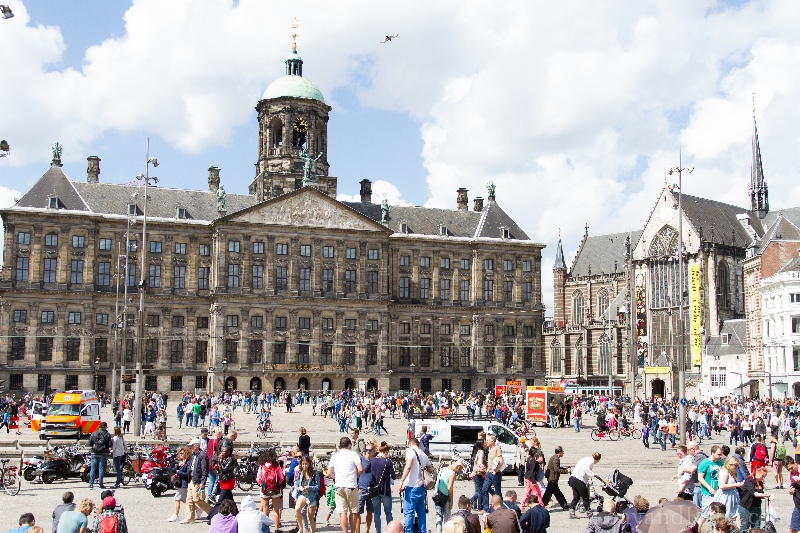 We must say, it’s a really cool artsy type of city full of beautiful waterways
. . . by day: 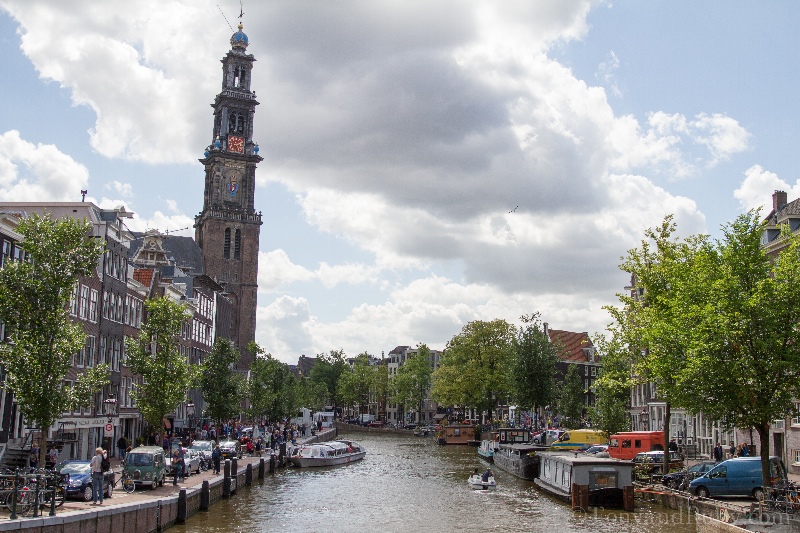 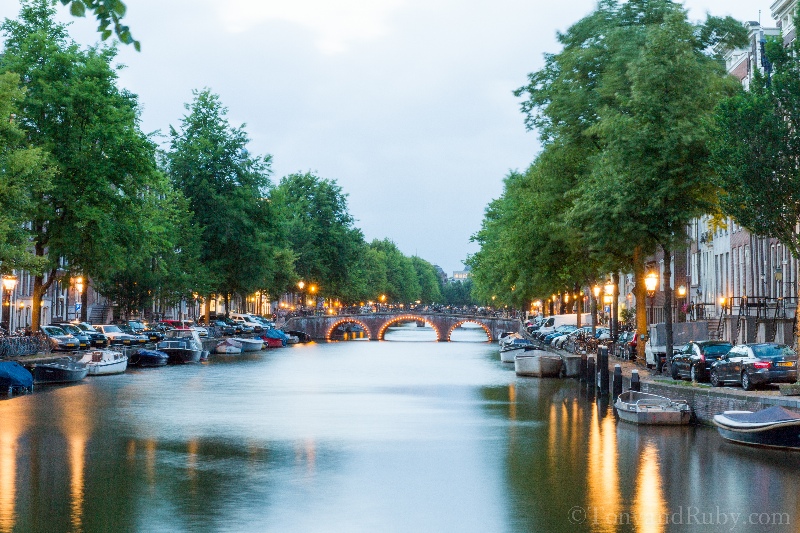 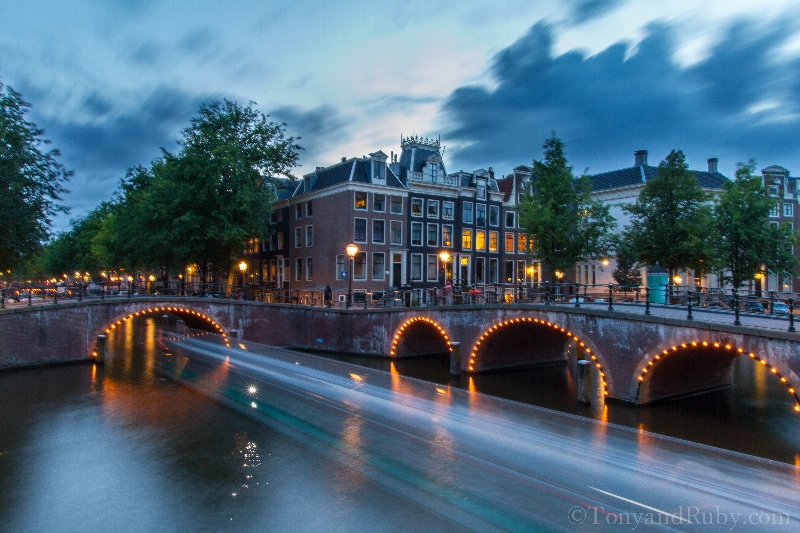 and there's lots of bicycles! 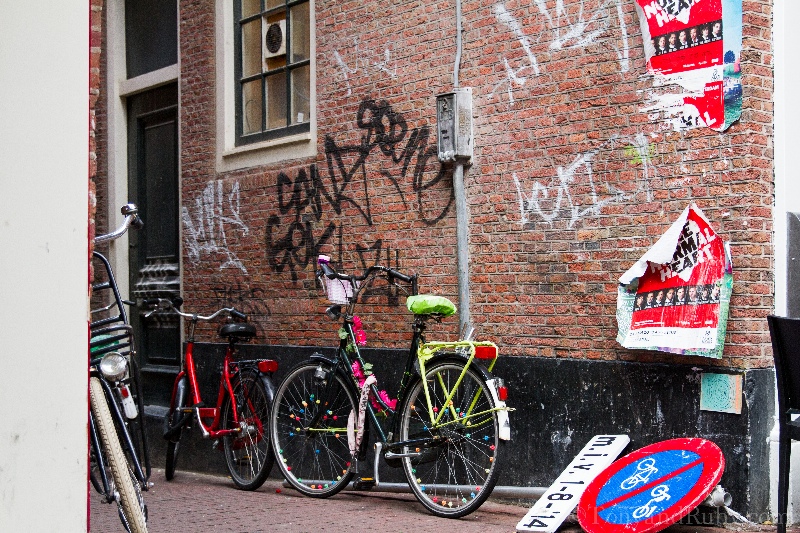 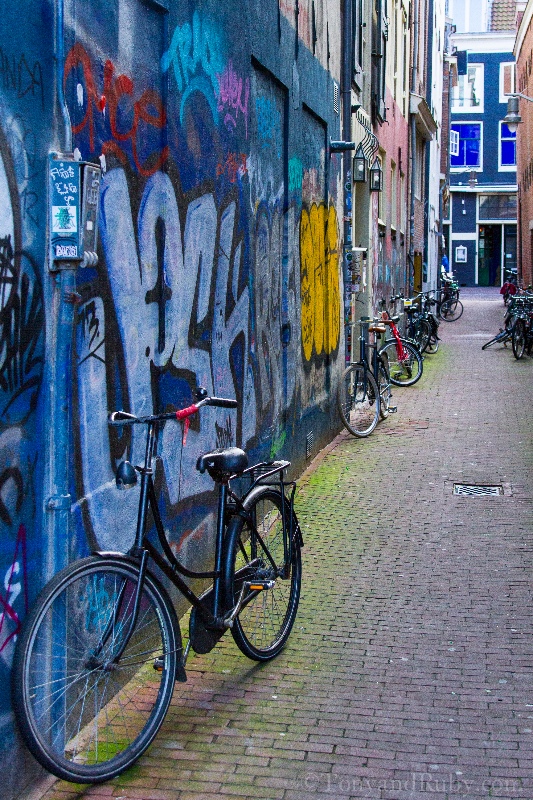 As per our usual we had bad weather and were in between pulling out our umbrella and putting it away our entire time there! We wanted to go to Anne Frank’s House but the line was too long

We got lost walking around in the art district of Jordan and decided to have a mini-picnic complete with the ubiquitous gouda cheese and wine at the waterfront. 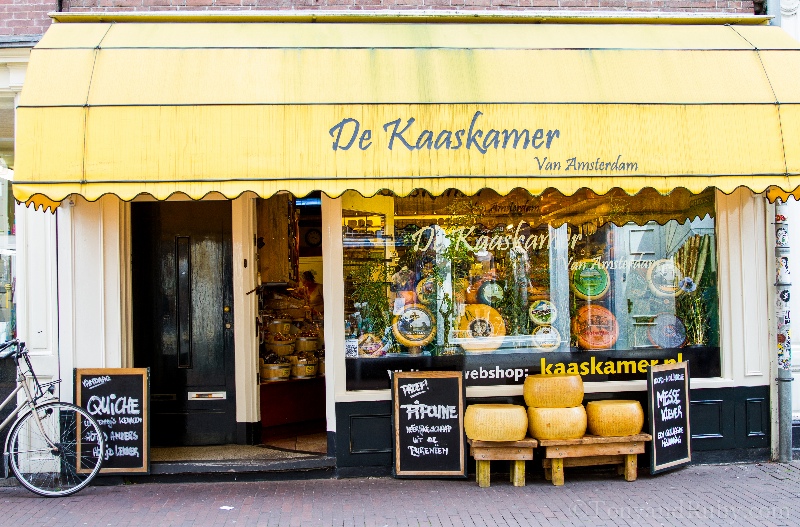 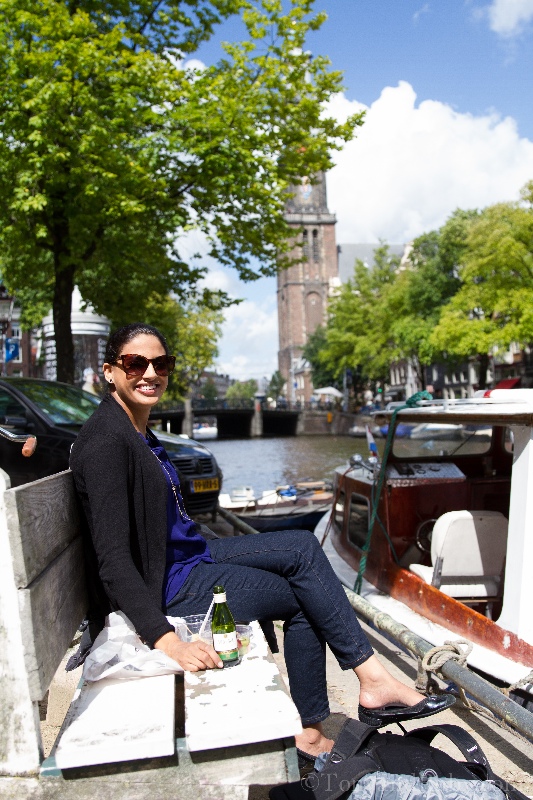 We walked though the Flower Market on our way to Rembrandt Park and a stop for a snack turned into dinner at an Italian restaurant called Vapiano. It was delicious but we soon discovered that it is actually a chain restaurant?!?! So on this trip, instead of a “McDonald’s Moment” when we are either too tired or hungry to find a decent restaurant, we now have “Vapiano moments” where we have to resort to eating at a chain because it is cheap, easy to find, has wifi and consistently good Italian food

There are free ferries behind the central train station and we would recommend visiting the Film museum aka the Eye Museum. We tried to meet up with our friend Antonio who lives just next door but unfortunately with no phone or internet we couldn’t coordinate. The basement portion of the museum is free to visit and they have some cool visual art projects and a touch sensor color projector that we would love to have for our kids someday. 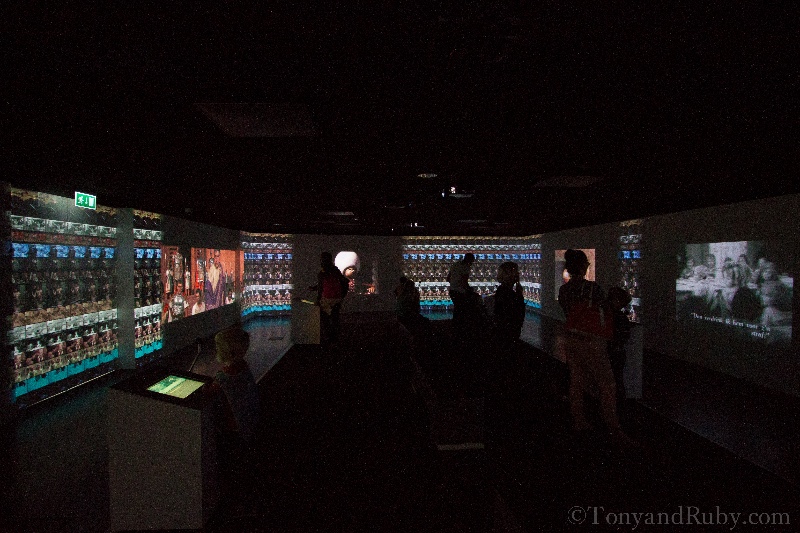 Since the Dutch colonized Indonesia you can find a lot of Indonesian restaurants in Amsterdam and Ruby was on a mission for some exotic food so we found a local Indo place and got takeout for a picnic in Vondelpark. 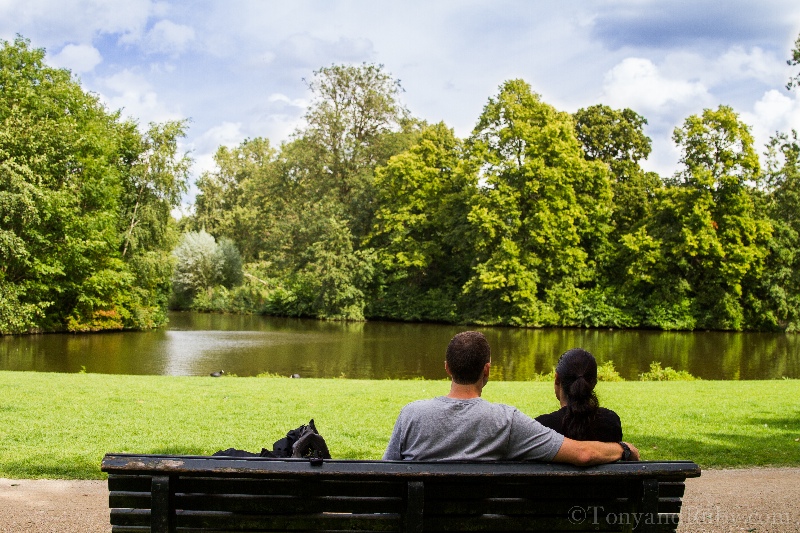 This city has tons of shopping opportunities and we went on a bit of a shopping spree because Ruby forgot a few things in our haste to pack our apartment for the movers.

Of course a trip to Amsterdam wouldn’t be complete with a trip to coffee shop. . .but we didn’t partake. We did however walk through the Red Light District which is definitely packed with people and was like nothing we have seen before. 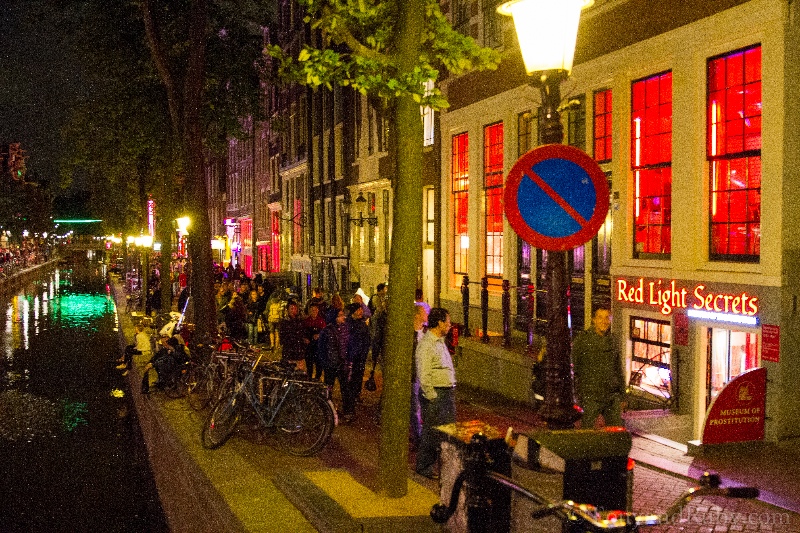