We love this region of Mexico! We have been to this area several times and it is always a predicatably easy and fun trip. It's very easy to drive here so we always rent a car so that we may have the freedom to visit places and not be trapped in a resort for the entire time. Friends have said that they have been pulled over and asked for bribes but that hasn't happened to us as of yet. We stayed in one of the more relaxed large resorts north of the airport and out of downtown Cancun since we are not into the clubbing scene anymore. Most of the all-inclusive resorts here are phenomenal with great food, drinks and of course that gorgeous aquamarine crystal clear warm ocean. . . and our resort was no exception. . . 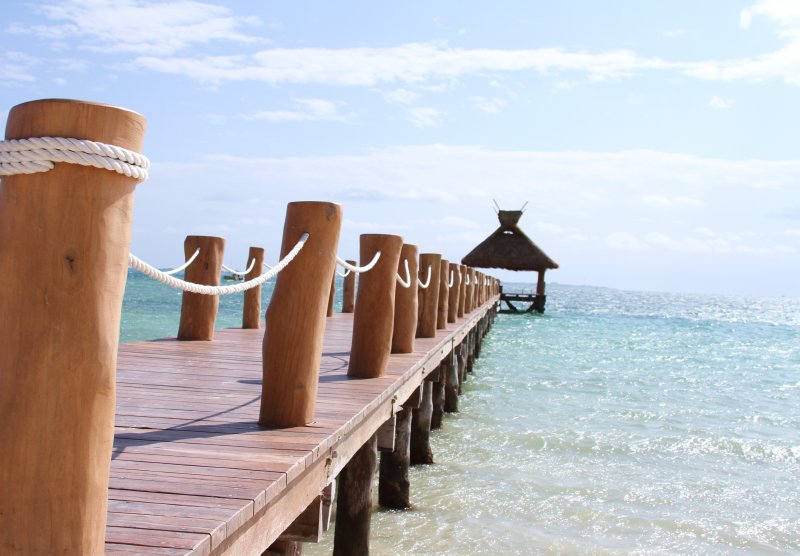 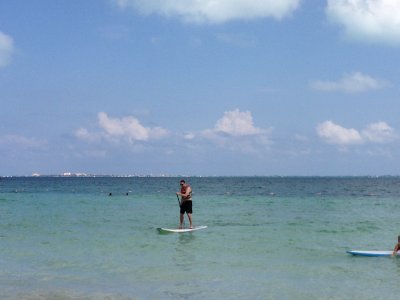 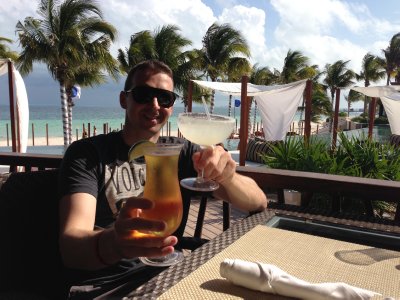 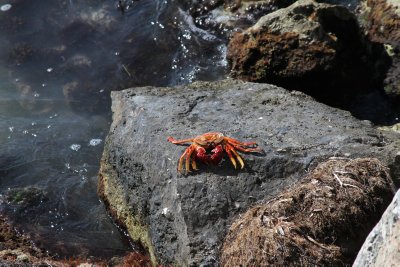 Of course we love to get away and do something adventerous so early one of the mornings we headed out to the ancient Mayan ruins of Chichen Itza. It was a couple hour drive to get there but fairly easy with well-paved roads if you can read a map or splurge on GPS. Chichen Itza is an ancient Mayan city and we could see why so many people would come and visit. Apparrently it was built in the 5th century and it is still unclear why the city was abandoned by the Itzas around 1224. We were disappointed to find out the famouse: El Castillo had been roped off and we would not be able to climb the 80 ft high pyramid. Each side of the pyramid has 91 steps, with the addition of the topmost platform adds up to 365, one for each day of the calendar year. We walked around and explored the large site in awe. 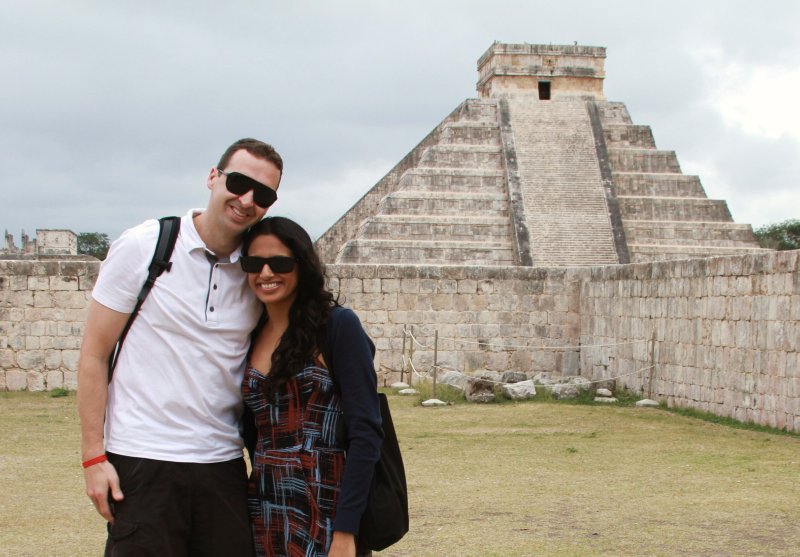 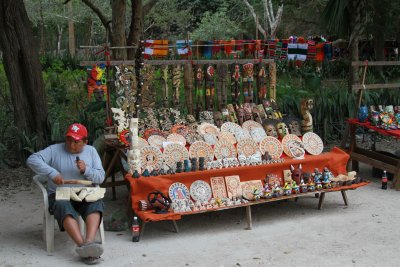 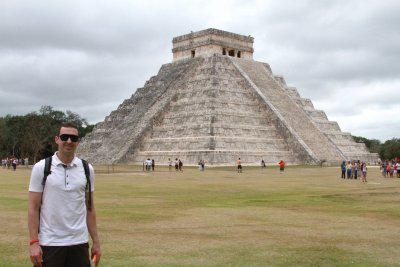 The tzompantli which was covered in carvings of skulls is where the bodies of sacrifical victims were displayed. 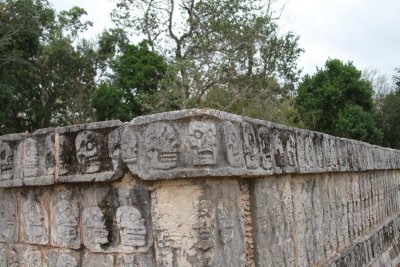 We absolutely loved all the carvings of serpents seen throughout the complex-- the Toltec god Kukulcan or the plumed serpent can be seen carved all around. 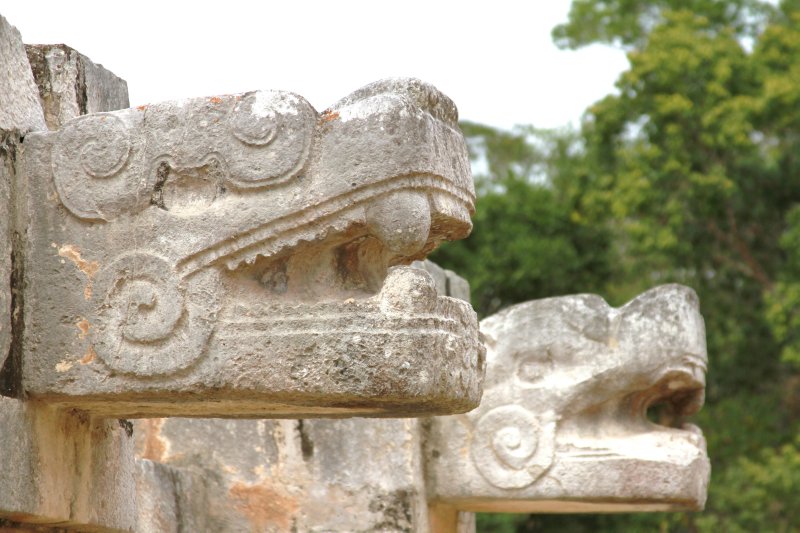 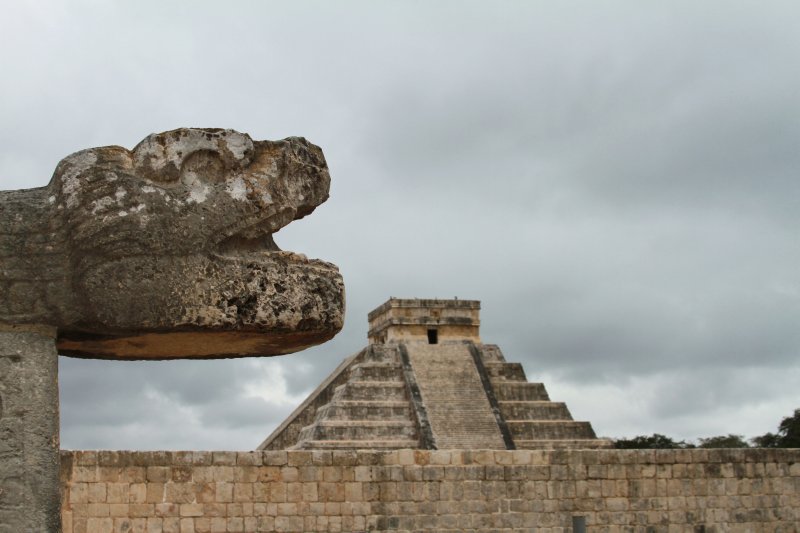 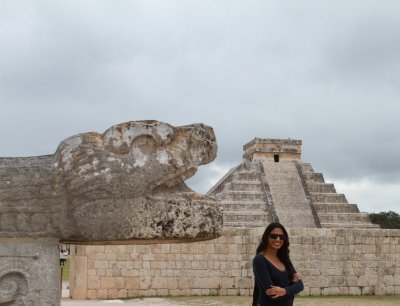 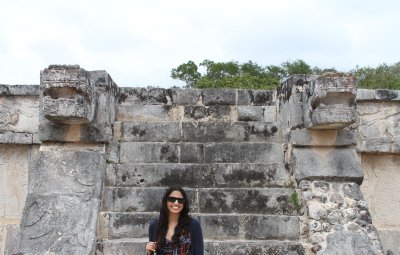 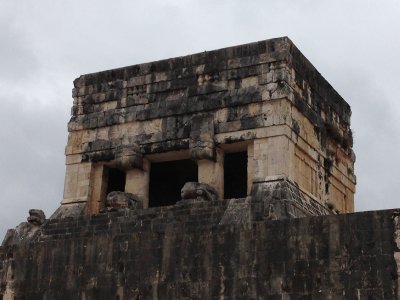 And the juego de pelota area is where Tony pretended to play basketball-- is was actually thought to have been some sort of playing field. Here if you stand at one end of the field and whisper, you can be heard on the opposite end. 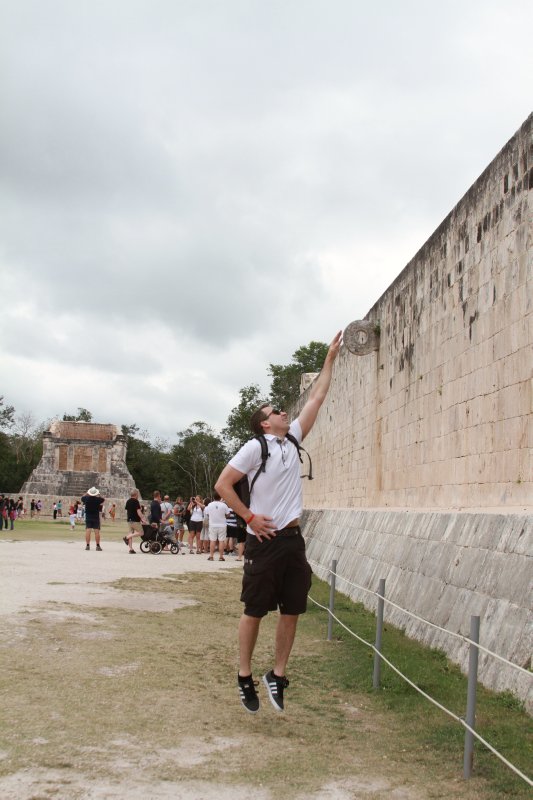 Oddly, there are lots of carved columns which reminded us more of Greece than Mexico! 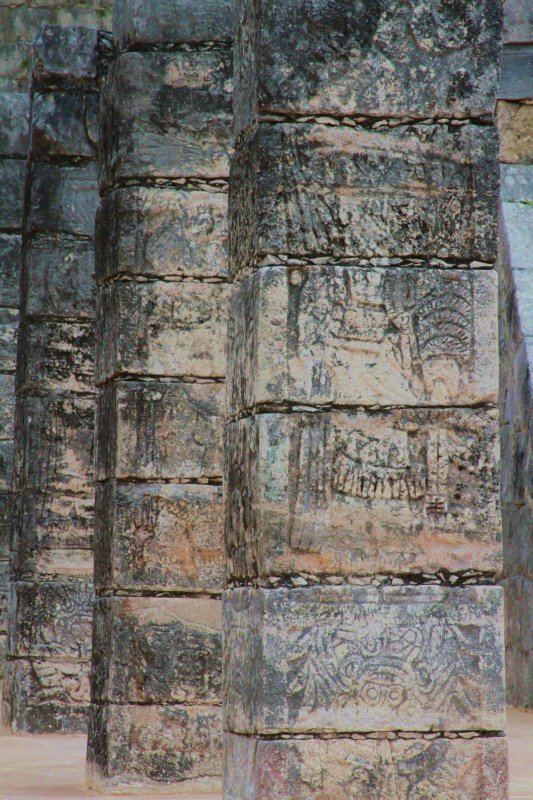 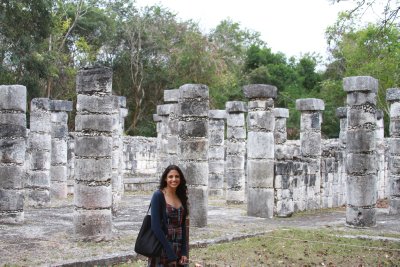 After a few hours at Chichen Itza we were getting hungry, we found a woman grilled chicken outside and since it smelled delicious that's where we stopped for an amazing grilled chicken lunch super close to the ruins--just off the main street. Tony's dad calls it "Chicken-Itza" LOL! 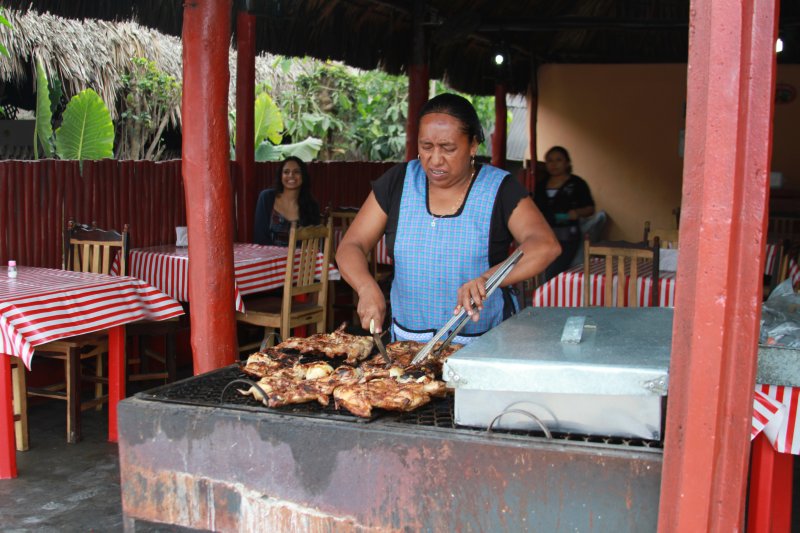 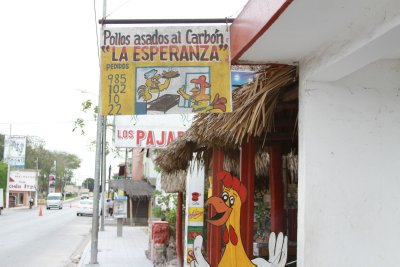 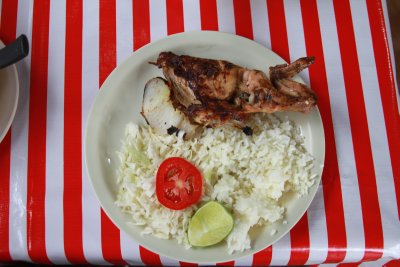 We weren't satisfied after not being able to climb the ruins at Chichen Itza so we headed off to Coba. These ruins are in the middle of the jungle and happen to be ones that you can climb. The grounds close at 5pm so we were cutting it close but we made it there by about 3:30pm. The largest temple at Coba, Nohoch Mul is 138 feet tall (the largest and highest in the Northern Yucatan) and that's exactly where we headed. Next time we would rent bikes to check out more of this huge temple complex hidden in the jungle. Apparently you can also take a bus here from Playa del Carmen and Tulum twice daily.

WOW! Is all we can say is we scaled the hundreds of steps up to the top of Coba. Ruby clutched the guide rope with a death grip and did her best not to look back/down because with her fear of heights she probably would have stopped dead in her tracks. Unlike her, Tony easily scaled his way up to the top and waited for her. The view from above was incredible, jungle 360 degrees around us. We sat and took in the view for quite a while before CAREFULLY making our way back down the pyramid-- after all, there is a sign that says you are climbing at your own risk! Since we arrived so late, we were also one of the last people to leave the ruins. It was incredible to see it empty just as a the sun was setting. Lucky us! 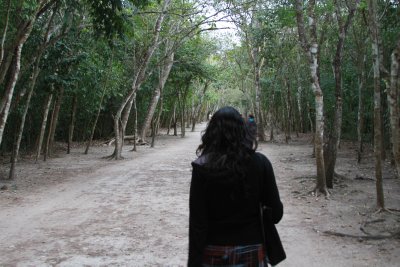 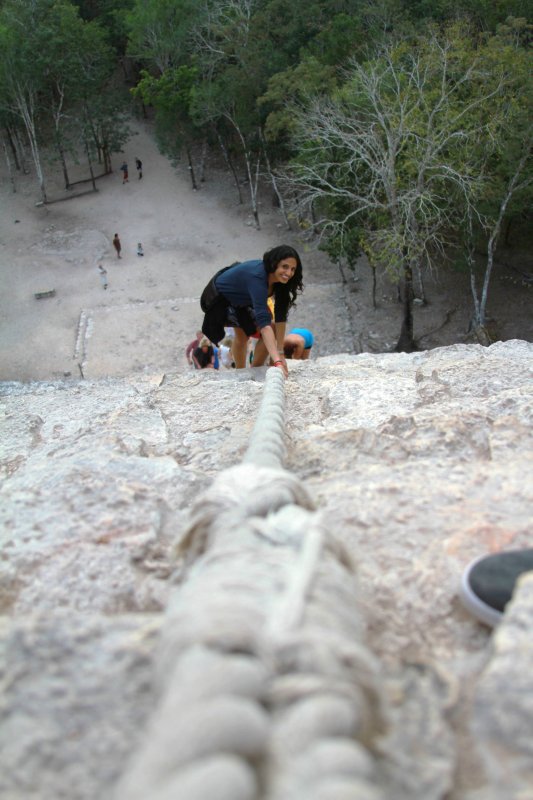 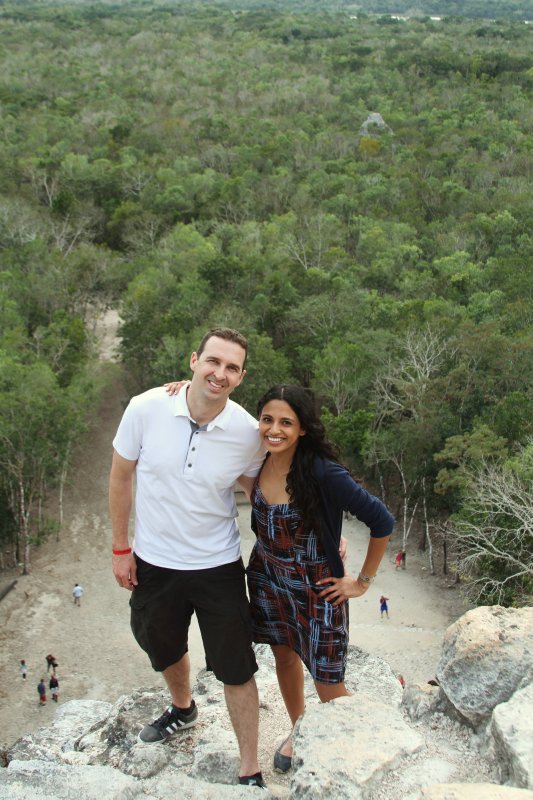 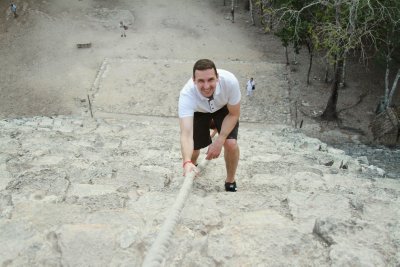 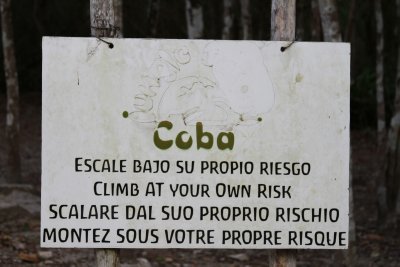 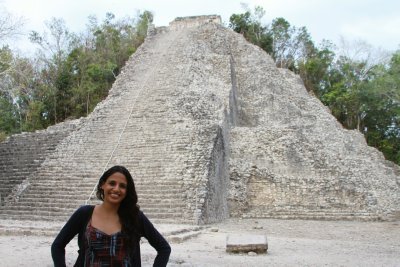 Afterwards we drove back to Cancun and enjoyed the next few days off at the beach resort sipping on cocktails and lazing on our cabana enjoying the view. . . 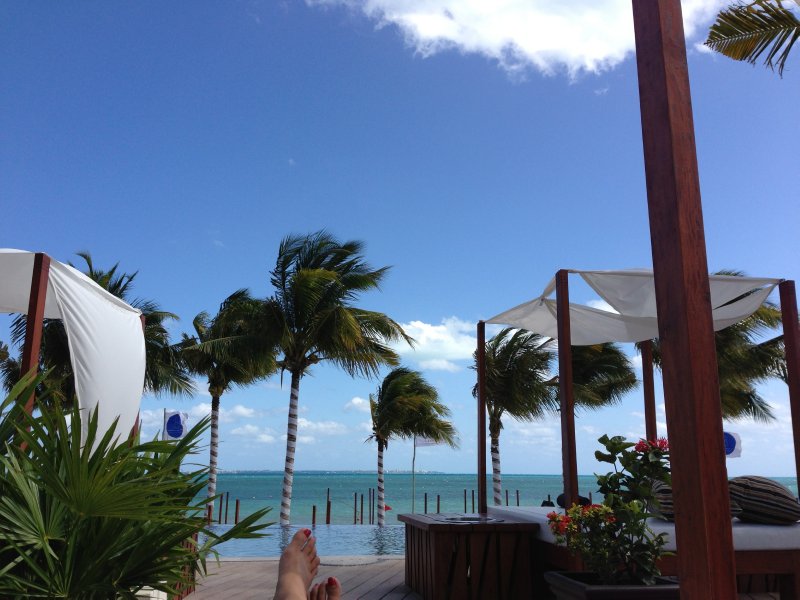 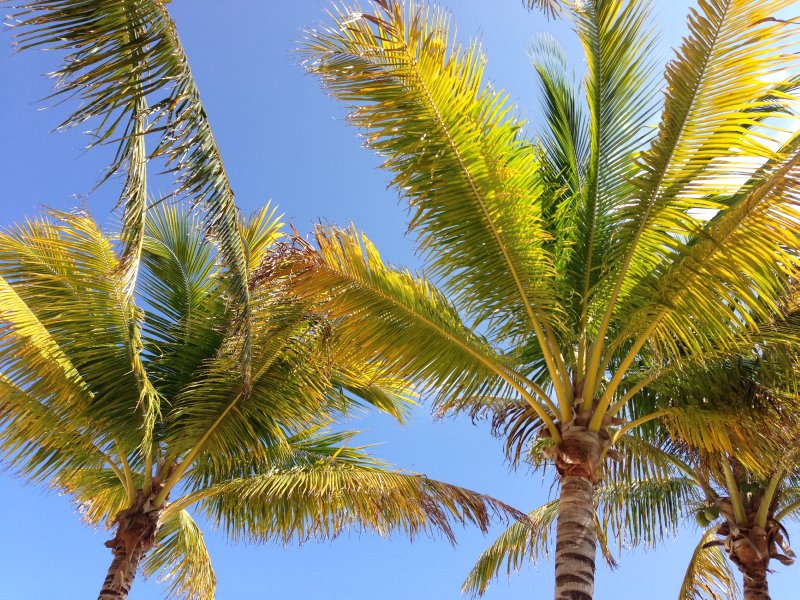